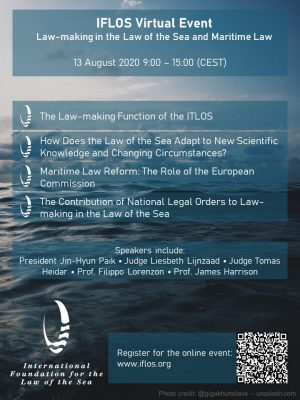 Since this year’s Summer Academy had to be postponed to next year due to the pandemic that is still unraveling around the world, IFLOS is proud and excited to host a half-day-long virtual event with distinguished speakers and engaged alumni on 13 August 2020 9:00 – 15:00 (CEST). The event will take place via an online video conference. We are very happy to announce that the event is already booked out and overwhelmed by the broad interest, but sad that we cannot accept further registrations. We hope to see you soon at one of our other events! The registered participants will receive a notification soon on whether they have registered early enough to be accepted. Those accepted will receive the programme and the link to the event.

Topics revolve around law-making and Law of the Sea and shine a light on many aspects of the inception of new law and the changing of existing law. Speakers include ITLOS President Jin-Hyun Paik, Judge Liesbeth Lijnzaad, Judge Tomas Heidar, Prof. Filippo Lorenzon and Prof. James Harrison.

We are very much looking forward to meeting you at our event!

All questions may be directed to summeracademy@iflos.org

25 YEARS UNITED NATIONS CONVENTATION ON THE LAW OF THE SEA

25 YEARS
UNITED NATIONS CONVENTION ON THE LAW OF THE SEA

took place in the Courtroom of the International Tribunal for the Law of the Sea. The Foundation supported this event.

For more Information please refer to the the Program below.

"Institutions and regions in ocean governance"

the 5th LAW OF THE SEA INSTITUTE CONFERENCE

“INSTITUTIONS AND REGIONS IN OCEAN GOVERNANCE”

took place at the International Tribunal for the Law of the Sea.

For more details please refer to the program and the registration form below.

END_OF_DOCUMENT_TOKEN_TO_BE_REPLACED

On March 2nd, 2006 the lecture and discussion on

took place at the International Tribunal for the Law of the Sea. The lecture was given by captain Heinz Dieter Jopp, Leiter Sicherheitspolitik und Strategie der Führungsakademie der Bundeswehr in Hamburg.

END_OF_DOCUMENT_TOKEN_TO_BE_REPLACED

"The Baltic Sea - Mare Nostrum of the EU?"

With regard to the EU expansion as from 1 May 2004 and the related legal questions of the Baltic, the Foundation organised a lecture of Dr. Georg Jarzembowski, MEP, on 26 May 2004 with the title

“The Baltic Sea – Mare Nostrum of the EU?”

followed by a podium discussion.

On the Commemoration of the 20th Anniversary of the Opening for Signature of the “1982 United Nations Convention on the Law of the Sea” an appraisal of the signification of this convention took place at the UN General Assembly 57th Session on December 9th /10th, 2002. At this event also the activities of the International Tribunal for the Law of the Sea in Hamburg, was an important object of the debate. Furthermore, the work of the Foundation was appreciated.