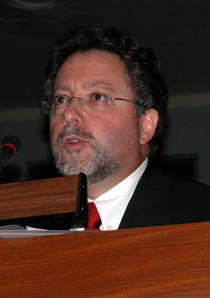 Jean-François Pulvenis de Seligny – Maurel, serves as Director, since August 2002, of the Fishery and Aquaculture Economics and Policy Division (previously Fishery Policy and Planning Division), Fisheries and Aquaculture Department, FAO. Born in Caracas (Venezuela) in 1949, he was educated in France where he studied law, international law and literature at the University of Nice.

Returning to Venezuela in 1974, he joined the Venezuelan Ministry of External Relations, where he was promoted to the rank of Ambassador in November 1985.  In 1988, he was appointed Director, Land and Maritime Boundaries Directorate, a position that he held until 2000, when he was designated Ambassador Extraordinary and Plenipotentiary to the Cooperative Republic of Guyana and to CARICOM (Representative Observer). He participated in numerous negotiations and conferences on fisheries, at the bilateral, regional and global levels, i.a. the United Nations Conference on Straddling Fish Stocks and Highly Migratory Fish Stocks (1993-1995), as well as FAO meetings leading to the adoption of the Compliance Agreement (1993), the Code of Conduct for Responsible Fisheries (1995) and its IPOAs on Fishing Capacity, Sharks and Seabirds (1998) and IUU fishing (2001).

He chaired the Inter-American Tropical Tuna Commission (IATTC), 2000-2001, and the Working Group on the Negotiation of the new IATTC Convention (“Antigua Convention”), Oct. 1998-June 2003; in the Intergovernmental Commission for the Conservation of Atlantic Tunas (ICCAT), chaired the General Working Group, in 1998 and 1999. Also participated in the Third United Nations Law of the Sea Conference (1974-1982), in the Preparatory Committee for the United Nations Conference on Environment and Development (1992) and in the United Nations Conference on Environment and Development (UNCED) (1992); and, as head of delegation, in the Intergovernmental Negotiating Committee for a Framework Convention on Climate Change (1991-1992) and the Intergovernmental Conference to Adopt a Global Programme of Action for the Protection of the Marine Environment from Land-Based Activities ( 1995).

In 1972, he was awarded a Silver Medal of the Legislation and Comparative Law Academy (Académie de législation et de droit comparé) (Toulouse, France) for his D.E.S. Mémoire: “L’Etat riverain” [The Coastal State].  He is the author of several publications on the law of the sea, the law of fisheries and environmental law.