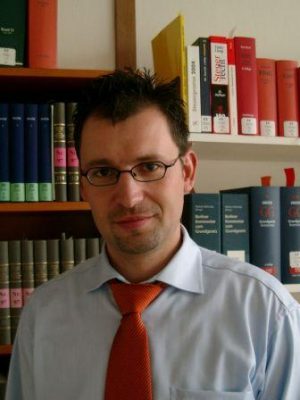 Professor Dr. Alexander Proelß studied law in Bonn and Tübingen and completed the first state examinations in Tübingen in the year 2000. He was subsequently engaged as a research associate at the chair for public law including public international law of Professor Dr. Dr. h.c. Wolfgang Graf Vitzthum in Tübingen.

In 2003, he obtained his doctoral degree with a thesis on the theme of “Protection of the Seas in Public International Law and European Law”. Prior to the commencement of the preparation course for articled clerks, during which time he completed a period at, inter alia, the Federal Constitutional Court (Department of Judge Evelyn Haas), he accepted several guest lectureships abroad (inter alia, the University of Pretoria, SA and the Jaroslaw-Mudryi-Academy, Charkow, UA).

In 2004, he completed the period of articling with the second state examinations. Thereafter, he was appointed Assistant Professor at the Faculty of Law in Tübingen and in November 2005 he was delegated as a research associate at the Federal Constitutional Court (Department of Judge Udo Di Fabio). Following his return to the Faculty of Law at the University of Tübingen, he accepted the offer of a professorship, which was newly created under the auspices of the Kiel Cluster of Excellence, “The Future Ocean“, residing at the Walter-Schücking Institute for International Law, in July 2007.

In September 2007, Alexander Proelß became a university Professor for public law, with particular focus on the law of the sea, at the Walther-Schücking Institute for International Law at Christian-Albrechts University in Kiel. He is a member of the Excellence Cluster “The Future Ocean” funded by the German Research Foundation, in which experts from various fields of specialisation concentrate their competences on ocean related issues.

His current areas of activity include several law of the sea-related projects (inter alia, on common fisheries policy and on European species protection) as well as studies on the acceptability of public international law within the Basic Law and to the relationship between the Federal Constitutional Court and international tribunals.

Since October 2010, he continues his academic career at the University of Trier; see
www.uni-trier.de/index.php?id=37905&L=2